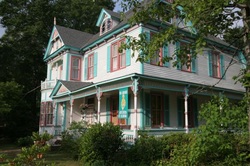 In April of 2007 David and Beth Melling bought the house with dreams of turning it into a bed and breakfast inn and tea room. After months of renovations, they finally opened for business in March, 2008.
Follow the current renovations. 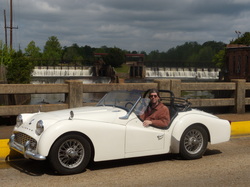 David was born and raised in Northern California. He worked for over 20 years for Hewlett Packard and it's spin-off company Agilent Technologies when corporate layoffs finally caught up with him. He graduated from Chico State University in California with a degree in Electrical Engineering. He enjoys woodworking, British cars, tea and renovating the house and gardens. 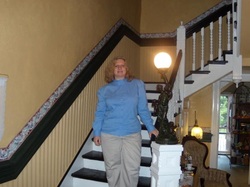 Beth was born in Montgomery, but was raised near Cuthbert, Georgia. She attended college at Truett-McConnell in North Georgia and graduated from Tift College which is now a part of Mercer University. After college, she served what was supposed to be 2 years in California in ministry to college students. She stayed and eventually met David and spent just over 20 years there, most of that time spent volunteering in her church and doing ministry with students on their local campus. She enjoys reading, sewing, and eating lunch with friends.

The Smith-Byrd House Bed & Breakfast and Tea Room is located in the heart of Prattville's Daniel Pratt Historic District and listed on the National Register of Historic Places. The home is a Queen Anne Style Victorian built in the 1880's by Daniel Smith who owned a mercantile store in town. He was married to the former Ada Ellis, member of one of the prominent families in Prattville during that era.

The house passed down to their daughter Kate Savage and remained in the family until around 1960 when it was sold to George and Ginger Byrd. After George's death, Ginger continued to live in the house and was well known in the community. Between 2000 and 2007 the house had two owners who had it for 2-3 years each.

Located about 12 miles northwest of the state capitol of Montgomery, the City of Prattville is a small but growing town that is dedicated to preserving its' past as well as growing for the future. It was founded by the industrialist Daniel Pratt who built the town on the banks of Autauga Creek. He was from New England so the historic downtown has the feel of a New England Village, very unique and different from most southern towns. Currently, downtown is experiencing revitalization and renovation as more businesses move into this part of town. There are a variety of shops and restaurants, all within walking distance of the Smith-Byrd House.

Our story starts back, not surprising, at our wedding. We honeymooned at a Bed & Breakfast. Over the years, we enjoyed tea and finding tea rooms. We would say "Wouldn't it be fun to own a tea room somewhere, sometime." My thinking would be that the tea room would come after retirement. Retirement would come early in the form of a layoff, occurring in the fall of 2006, exiting in April of 2007. Beth suggested that maybe now would be the time to start that tea room that we had always talked about. I said "Oh no, I need a real job." So while I sent out resume's, Beth went online searching for old houses to operate a tea room. Beth finished her semester at seminary, and in the month of June, we took a cross-country trip to Alabama.